“Is It Reasonable to Value Workers in a 21st Century Business?” 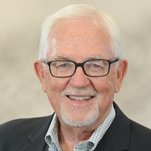 Al Erisman is Executive in Residence emeritus at the School of Business, Government, and Economics at Seattle Pacific University (SPU).  He currently is writing, speaking, and involved on the boards of KIROS and the Theology of Work Project.

In April 2001, Al completed a 32-year career at The Boeing Company, the last 10 years as Director of R&D for computing and mathematics. There he led a staff of 250-300 scientists as a part of the Boeing central research organization. He is the author of The Accidental Executive: Lessons on Business, Faith, and Calling from the Life of Joseph, co-editor of The Purpose of Business: Contemporary Perspectives from Different Walks of Life, and The ServiceMaster Story: Navigating Tension between People and Profit. His new project is another book, A Mathematical Way of Seeing.

Al and his wife Nancy have been married 57 years with three grown children (Michael, Andrew, and Amy) and seven grandchildren. Al and Nancy partner in work and faith activity both locally and around the world, and together serve at Westminster Chapel in Bellevue.

Topic Summary:
In the service industry, workers are often treated as utilities, low cost manual labor, rather than as whole people. Perhaps this is true in other work segments as well.

ServiceMaster established a new standard, basing business decisions on its first two objectives: To Honor God in All We Do and To Help People Develop. They implemented their philosophy of business through very specific practices, rooted in the Christian faith of five leaders between 1929 and 2001. They showed how to care for, even love, their employees.

How did this work out for the business? As long as they stayed focused on the objectives, they had success by many measures. They were awarded Top Service Company in the nation by Fortune (1985, 1995). They were ranked one of the 20 most admired companies in the world by The Financial Times (1998). Harvard wrote two case studies on the company. Peter Drucker, noted business commentator and consultant, told them they were not in the services business, but in the people development business. They adapted the company to cultural, legal, and economic fluctuations over 70 years. And they grew in revenue year after year from 1970, ending the century as a $6 billion publicly-traded, global company.

In 2020, we can learn a great deal about doing business to the glory of God by looking at the way they implemented their philosophy of business through very specific practices. Those who work in a business and are not the ultimate decision makers can also learn from this story. There is insight about doing their work to the glory of God while finding purpose and meaning in what they may regard as ordinary work or just a job.

The presentation is based on Al’s recently released book, The ServiceMaster Story: Navigating Tension between People and Profit.

Registration information:
By registering for KIROS events, you agree to have your email added to our e-invitation list. You can unsubscribe at any time.

Creating an account will allow you to register and pay for multiple events, view past registrations, and pre-populate some of your registration information. Creating a login is optional.

Register For This Site