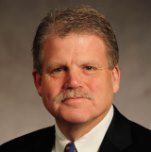 “Restoration and Redemption: A View from the Narrows Bridge”

Eric Lind is a graduate of the Executive Development Program at the University of Washington, Foster School of Business, and programs in Finance, Accounting, and Strategic Finance at the Harvard Business School. He received his law degree from Seattle University, and received a certificate in International Law and Law of the European Economic Community from Queen’s College in Cambridge, England. In addition, Eric received a Master of Theology (Th.M.) from Andersonville Theological Seminary and received his undergraduate degree from Washington State University in Political Science and Economics. He practiced law for 16 years, and then because of a pattern of sin, took a horrible fall.

On a beautiful March morning, Tacoma KIROS met at C.I. Shenanigans restaurant overlooking the Puget Sound. It was a bright, sunny, spring morning, the day full of hope and God’s goodness. Eric Lind was our speaker that morning, sharing his story of God’s redemption and restoration of his faith, his life, and his career. At one of the lowest points in his life, Eric found himself on the Narrows Bridge, the rain coming down sideways in the middle of a cold, windy, February night. Not intending to jump from the bridge, but what else does one do on a cold, rainy, windy night? Then the voice of God spoke and Eric listened. “You haven’t seen the end of the chapter, much less the end of the book. Don’t do anything foolish.”

The road from that desperate point on the Narrows Bridge to speaking at an early morning KIROS meeting overlooking the beautiful Puget Sound is a message of hope, restoration, redemption, and God’s unfailing love for His child. Even when those adverse situations were created through poor decisions and actions, no situation is hopeless. There is no life that cannot be redeemed.

Eric Lind was a very successful, high-profile district attorney, who at the age of 25 had a lead role in the case of a lifetime. The attention and notoriety was exhilarating and he liked it. The career path became the chase of the attention addiction. In the eyes of the world Eric was very successful, and he would do anything to maintain the successful reputation. Pride was his god. Eric says once you let the devil in the car, he will be driving by the end of the block. Not only did Eric open the door, he welcomed the devil into the driver’s seat. Eric engaged in patterns of behavior that fueled that approval: addiction, lying, embezzlement and forging a judge’s signature. One sure way to end up on the other side of the law is to forge a judge’s signature, for which he spent 28 months in Federal Prison.

After spending 28 months in Federal prison, Eric felt led by God to be completely honest about his past. He applied to a R.V. dealership. The owner hired him as a sales person, but told him that’s all he’d ever be. Eric has great management talents and skills, and he moved from Sales to Sales Manager to General Sales Manager to General Manager. By being absolutely truthful about everything to everyone with complete candor and honesty, Eric was given the opportunity to manage that dealership through some extremely difficult financial times and trying situations. God has redeemed and restored Eric’s life for the Glory of God. He says if you tell everyone everything, you have nothing to hide. There are no secrets and nothing to be afraid of. Being absolutely truthful and transparent with complete candor about his past, God has blessed his career and his life.

From the Narrows Bridge at a hopeless low point in Eric’s life to a life lived for Christ, Eric knows restoration, redemption, and grace. There is no life that cannot be redeemed and restored. No situation is too hopeless for God. Eric is extremely talented and gifted. He serves the Lord in the marketplace, helping broken, hurting people find hope. Eric loves God, he loves people, and his is a life of restoration, redemption and grace.